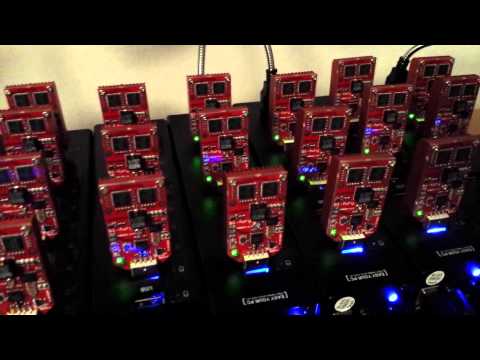 Note: You can read this on GitHub, Medium or old Reddit to see the 207 links.

The biggest announcement of the month was the new kind of decentralized exchange proposed by @jy-p of Company 0. The Community Discussions section considers the stakeholders' response.
dcrd: Peer management and connectivity improvements. Some work for improved sighash algo. A new optimization that gives 3-4x faster serving of headers, which is great for SPV. This was another step towards multipeer parallel downloads – check this issue for a clear overview of progress and planned work for next months (and some engineering delight). As usual, codebase cleanup, improvements to error handling, test infrastructure and test coverage.
Decrediton: work towards watching only wallets, lots of bugfixes and visual design improvements. Preliminary work to integrate SPV has begun.
Politeia is live on testnet! Useful links: announcement, introduction, command line voting example, example proposal with some votes, mini-guide how to compose a proposal.
Trezor: Decred appeared in the firmware update and on Trezor website, currently for testnet only. Next steps are mainnet support and integration in wallets. For the progress of Decrediton support you can track this meta issue.
dcrdata: Continued work on Insight API support, see this meta issue for progress overview. It is important for integrations due to its popularity. Ongoing work to add charts. A big database change to improve sorting on the Address page was merged and bumped version to 3.0. Work to visualize agenda voting continues.
Ticket splitting: 11-way ticket split from last month has voted (transaction).
Ethereum support in atomicswap is progressing and welcomes more eyeballs.
decred.org: revamped Press page with dozens of added articles, and a shiny new Roadmap page.
decredinfo.com: a new Decred dashboard by lte13. Reddit announcement here.
Dev activity stats for June: 245 active PRs, 184 master commits, 25,973 added and 13,575 deleted lines spread across 8 repositories. Contributions came from 2 to 10 developers per repository. (chart)

Update from Obelisk: shipping is expected in first half of July and there is non-zero chance to meet hashrate target.
Another Chinese ASIC spotted on the web: Flying Fish D18 with 340 GH/s at 180 W costing 2,200 CNY (~340 USD). (asicok.com – translated, also on asicminervalue)
dcrASIC team posted a farewell letter. Despite having an awesome 16 nm chip design, they decided to stop the project citing the saturated mining ecosystem and low profitability for their potential customers.

bepool.org is a new mining pool spotted on dcred.eu.
Exchange integrations:
Two OTC trading desks are now shown on decred.org exchanges page.
BitPro payment gateway added Decred and posted on Reddit. Notably, it is fully functional without javascript or cookies and does not ask for name or email, among other features.
Guarda Wallet integrated Decred. Currently only in their web wallet, but more may come in future. Notable feature is "DCR purchase with a bank card". See more details in their post or ask their representative on Reddit. Important: do your best to understand the security model before using any wallet software.

Merchants:
BlueYard Capital announced investment in Decred and the intent to be long term supporters and to actively participate in the network's governance. In an overview post they stressed core values of the project:


There are a few other remarkable characteristics that are a testament to the DNA of the team behind Decred: there was no sale of DCR to investors, no venture funding, and no payment to exchanges to be listed – underscoring that the Decred team and contributors are all about doing the right thing for long term (as manifested in their constitution for the project).
The most encouraging thing we can see is both the quality and quantity of high calibre developers flocking to the project, in addition to a vibrant community attaching their identity to the project.


The company will be hosting an event in Berlin, see Events below.
Arbitrade is now mining Decred.


Hey guys! I'd like to share with you my latest adventure: Stakey Club, hosted at stakey.club, is a website dedicated to Decred. I posted a few articles in Brazilian Portuguese and in English. I also translated to Portuguese some posts from the Decred Blog. I hope you like it! (slack)


@morphymore translated Placeholder's Decred Investment Thesis and Richard Red's write-up on Politeia to Chinese, while @DZ translated Decred Roadmap 2018 to Italian and Russian, and A New Kind of DEX to Italian and Russian.
Second iteration of Chinese ratings released. Compared to the first issue, Decred dropped from 26 to 29 while Bitcoin fell from 13 to 17. We (the authors) restrain ourselves commenting on this one.
Videos:
Audio:
Featured articles:
Articles:

Community stats: Twitter followers 40,209 (+1,091), Reddit subscribers 8,410 (+243), Slack users 5,830 (+172), GitHub 392 stars and 918 forks of dcrd repository.
An update on our communication systems:
Jake Yocom-Piatt did an AMA on CryptoTechnology, a forum for serious crypto tech discussion. Some topics covered were Decred attack cost and resistance, voting policies, smart contracts, SPV security, DAO and DPoS.
A new kind of DEX was the subject of an extensive discussion in #general, #random, #trading channels as well as Reddit. New channel #thedex was created and attracted more than 100 people.
A frequent and fair question is how the DEX would benefit Decred. @lukebp has put it well:


Projects like these help Decred attract talent. Typically, the people that are the best at what they do aren’t driven solely by money. They want to work on interesting projects that they believe in with other talented individuals. Launching a DEX that has no trading fees, no requirement to buy a 3rd party token (including Decred), and that cuts out all middlemen is a clear demonstration of the ethos that Decred was founded on. It helps us get our name out there and attract the type of people that believe in the same mission that we do. (slack)


Another concern that it will slow down other projects was addressed by @davecgh:


The intent is for an external team to take up the mantle and build it, so it won't have any bearing on the current c0 roadmap. The important thing to keep in mind is that the goal of Decred is to have a bunch of independent teams on working on different things. (slack)


A chat about Decred fork resistance started on Twitter and continued in #trading. Community members continue to discuss the finer points of Decred's hybrid system, bringing new users up to speed and answering their questions. The key takeaway from this chat is that the Decred chain is impossible to advance without votes, and to get around that the forker needs to change the protocol in a way that would make it clearly not Decred.
"Against community governance" article was discussed on Reddit and #governance.
"The Downside of Democracy (and What it Means for Blockchain Governance)" was another article arguing against on-chain governance, discussed here.
Reddit recap: mining rig shops discussion; how centralized is Politeia; controversial debate on photos of models that yielded useful discussion on our marketing approach; analysis of a drop in number of transactions; concerns regarding project bus factor, removing central authorities, advertising and full node count – received detailed responses; an argument by insette for maximizing aggregate tx fees; coordinating network upgrades; a new "Why Decred?" thread; a question about quantum resistance with a detailed answer and a recap of current status of quantum resistant algorithms.
Chats recap: Programmatic Proof-of-Work (ProgPoW) discussion; possible hashrate of Blake-256 miners is at least ~30% higher than SHA-256d; how Decred is not vulnerable to SPV leaf/node attack.

Obelisk announced Launchpad service. The idea is to work with coin developers to design a custom, ASIC-friendly PoW algorithm together with a first batch of ASICs and distribute them among the community.
Equihash-based ZenCash was hit by a double spend attack that led to a loss of $450,000 by the exchange which was targeted.
Almost one year after collecting funds, Tezos announced a surprise identification procedure to claim tokens (non-javascript version).
A hacker broke into Syscoin's GitHub account and implanted malware stealing passwords and private keys into Windows binaries. This is a painful reminder for everybody to verify binaries after download.
Circle announced new asset listing framework for Poloniex. Relevant to recent discussions of exchange listing bribery:


Please note: we will not accept any kind of payment to list an asset.


Bithumb got hacked with a $30 m loss.
Zcash organized Zcon0, an event in Canada that focused on privacy tech and governance. An interesting insight from Keynote Panel on governance: "There is no such thing as on-chain governance".
Microsoft acquired GitHub. There was some debate about whether it is a reason to look into alternative solutions like GitLab right now. It is always a good idea to have a local copy of Decred source code, just in case.
Status update from @sumiflow on correcting DCR supply on various sites:


To begin with, none of the below sites were showing the correct supply or market cap for Decred but we've made some progress. coingecko.com, coinlib.io, cryptocompare.com, livecoinwatch.com, worldcoinindex.com - corrected! cryptoindex.co, onchainfx.com - awaiting fix coinmarketcap.com - refused to fix because devs have coins too? (slack)

This is the third issue of Decred Journal after April and May.
Most information from third parties is relayed directly from source after a minimal sanity check. The authors of Decred Journal have no ability to verify all claims. Please beware of scams and do your own research.
The new public Matrix logs look promising and we hope to transition from Slack links to Matrix links. In the meantime, the way to read Slack links is explained in the previous issue.
As usual, any feedback is appreciated: please comment on Reddit, GitHub or #writers_room. Contributions are welcome too, anything from initial collection to final review to translations.
Credits (Slack names, alphabetical order): bee and Richard-Red. Special thanks to @Haon for bringing May 2018 issue to medium.

Binance Coin $ 29.22 0.48%. Polkadot $ 4.61 3.44%. Litecoin $ 63.65 2.44%. Cardano $ 0.110959 4.37%. Alle Kurse. ASIC Bitcoin-Mining: CoinBau meldet sich zurück! Startseite; Aktuelle Artikel im Überblick; Krypto; Bitcoin; ASIC Bitcoin-Mining: CoinBau meldet sich zurück! von Mark Preuss. Am 16. September 2014 26. Mai 2019 · Lesezeit: 3 Minuten. Mark Preuss. Mark Preuss ist Gründer und ... Today, ASIC means business and profit and we are here to show you some of the best miners out there. 1. Butterfly Lab’s BitForce 500 GH/s mining rig. With an amazing 500 gigahashes per second of efficiency, this ASIC mining rig from Butterfly Labs was first seen working in June. 2. Bitforce SC 60 Bitcoin miner This particular mini ASIC miner runs at 3.6 GH/s, which means that is really fast compared to its peers. Estimated profits are slightly better (a little over $1 each year). Another plus for this machine is that it can be plugged into a wireless router, which means it doesn’t have to tug at your computer resources. This ASIC miner is worth $20, which is really cheap given its speed and ... Should You Purchase A Bitmain Antminer S9 Bitcoin Miner In 2019 Or 2020? December 15, 2019 Bitcoin Stock Dividends, France + Bitcoin, Countries Holding Bitcoin & IMF + Stablecoins; November 18, 2019 Bitcoin Ethereum Litecoin Ripple Binance Technical Analysis Chart 6/28/2019 By ChartGuys.com Bitmain Antrouter R1 Wifi Solo Bitcoin Miner. The Antrouter is another device that just barely fits into the category of USB Bitcoin miner. It doesn’t provide much in terms of power, with just 5.5 GH/s, and so you shouldn’t expect to make much more than $1 per year in profit. On the bright side, it’s an inexpensive tool that can also ... Innosilicon A5 Dashmaster X11 32.5GH/S ASIC Cryptocurrency miner PSU Accessories. June 16, 2019 MrCrypto. Innosilicon A5 Dashmaster X11 32.5GH/S ASIC Cryptocurrency miner PSU Accessories Price : 1,250.00 Ends on : Ended View on eBay . Post navigation. Failed Crypto Projects Get Final Resting Place In Altcoins Graveyard. Bitcoin Worth Over $9,200 as Top Cryptos See Growth. Related posts . Shop ... Tardis ASIC Bitcoin miner uses 6300W of power to mine your favorite Cryptocurrency. Besides it also weighs around 37000g which is a lot less than the industry average. In comparison, Bitmain S17 BTC mining hardware only weighs 9500g. Talking about returns, a person can make $17 a day in profit from this Bitcoin mining equipment. However, as with the rest of the above ASIC bitcoin miner, the ...